Syria: Manbij Military Council’s decision to stop forced conscription is not enough – civilians must be protected 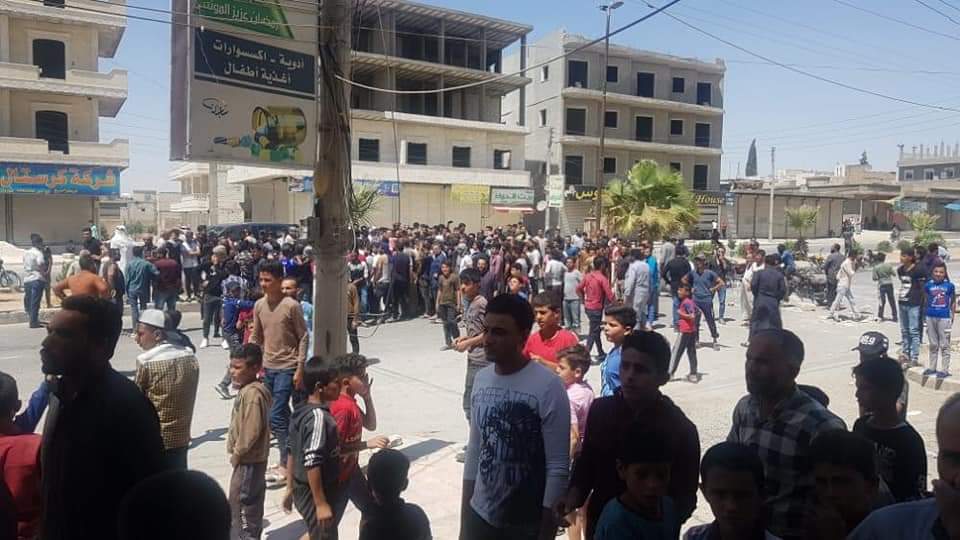 Geneva – Manbij Military Council’s decision to stop the forced conscription campaign in Manbij and its countryside in northern Syria and refer the matter for further discussion and study is not enough, Euro-Mediterranean Human Rights Monitor said in a statement. What must be further studied are the true causes of tension and enabling the population to choose their representatives who express their identity and meet their aspirations.

The Syrian Democratic Forces (SDF) had dealt violently with protests in the city of Manbij in northern Syria, leaving dozens of peaceful protesters killed and wounded.

Thousands of demonstrators gathered Tuesday in the city center’s public square, at the Great Mosque and at the Al-Khataf checkpoint east of the city, to protest.

The demonstrators’ demands were: ending the compulsory conscription law, increasing the city's fuel quota (since it has been witnessing a stifling fuel crisis), passing a law to combat corruption, and ending the rule of the Kurdish minority over the inhabitants of Arab tribes.

Eight demonstrators were killed, and more than 30 others were injured, most of whom fell near the Al-Khataf checkpoint after the SDF suppressed the protests by using live bullets and other violent means of repression.

However, an independent investigation must be opened into the events with an effective accountability system that prevents the perpetrators from escaping punishment.

“We gathered at the Al-Khataf checkpoint, and we started chanting against the forced recruitment and the discriminatory policies of the SDF,” said M.L., an eyewitness and one of the participants in the demonstrations.

“When our numbers increased, the SDF brought in military reinforcements comprising of four-wheel-drive vehicles loaded with dozens of armed men with Kalashnikovs. They started firing live bullets at the unarmed protesters, killing and wounding several”.

Euro-Med Monitor’s team viewed a video published by activists in Manbij showing the bodies of several of the dead, in addition to demonstrators suffering from severe injuries from live bullets and taken to city hospitals after being shot by SDF.

After firing live bullets at the demonstrators, protesters stormed the Al-Khataf checkpoint and took control of it, while the SDF members withdrew from the checkpoint to nearby military sites.

The Civil Administration in the city had issued a curfew, starting at 1:00 p.m. on June 1, for 48 hours, after massive protests took place in the city.

However, the demonstrators refused to comply with the curfew, as merchants closed their shops and participated in the demonstrations. In addition, the demonstrators blocked the international highway “M4” located between the governorates of Hasaka and Aleppo by burning tires on the street.

The SDF has been trying since May 28 to forcibly recruit boys and girls born between 1990 -2003 in several cities, such as Raqqa, Deir ez-Zor, al-Hasakah, Qamishli, Ain al-Arab, al-Malikiyah and al-Darbasiyah, under its slogan "the duty of self-defense". The SDF pursued young men in their homes and arrested anyone who refused to comply with these decisions.

The violent handling of the ongoing demonstrations will push the city towards more violence, especially since the arbitrary decisions have created great tension among Arab civilians who reject the rule of the Kurdish minority.

The SDF must open an independent and transparent investigation into the killing of demonstrators, stop using excessive force to suppress protests, and guarantee individuals the right to peaceful assembly and expression.

The international coalition forces must review their supportive stance with the SDF to ensure their commitment to applying human rights standards and principles in the areas they control. Any future aid must link to their commitment to respecting the civil, political, and social rights of the population.