Syria: Shelling civilian areas in Idlib is a dangerous escalation that requires a quick response 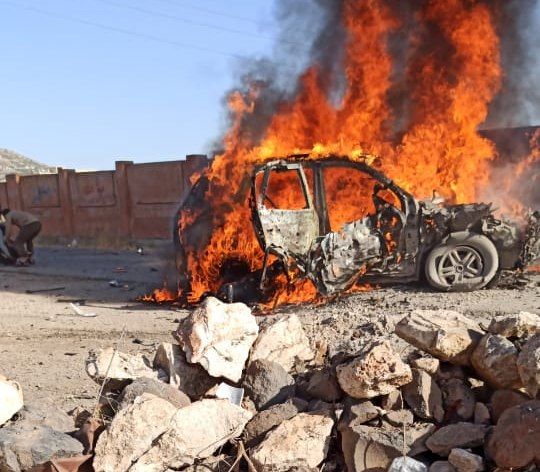 burning car that was targeted by the Russian/Syrian forces in Idlib | Source: Twitter
Jun 10,2021 Syria
Share On Copied
FR | AR

Geneva – The Russian and Syrian forces have escalated their air and artillery attacks on the Idlib region, leaving several civilians killed in the cities and villages of Jabal Al-Zawiya yesterday, Euro-Mediterranean Human Rights Monitor said today in a statement.

The Russian and Syrian forces carried out simultaneous air and artillery attacks targeting several towns and villages in the Jabal al-Zawiya area, south of Idlib, killing at least five civilians, including a child and a woman, and wounding others. Several leaders of Tahrir al-Sham, the most influential armed faction in Idlib, were also killed.

Euro-Med Monitor obtained some of the names of those that died: Muhammad Abdul Hamid Al-Assi, Walid Sobhi Al-Assi, Abdullah Abdul-Qader Al-Assi and Walid Samih Harmoush. Four others were killed but still unidentified.

H.N, a resident of Ablin town, told Euro-Med Monitor: “At about 10 am, we heard the sounds of strong explosions that shook the town, preceded by intense flights of warplanes [above the area]. Everything happened so suddenly, and there were no clashes or military operations before the explosions. I rushed with a group of people towards one of the areas affected by the bombing to find four fully burned bodies inside a burnt vehicle. There were several injuries that the civil defense teams transferred to hospitals upon their arrival at the place”.

Dozens of families had to flee the area due to the intense bombardment. Some families had returned to their homes to harvest crops, which they depend on to secure their livelihood.

Idlib governorate and its countryside cannot tolerate new waves of displacement. Thousands of civilians have already been displaced because of previous military operations, especially since the lack of security in their original areas and plans for reconstruction.

The Russian and Syrian forces must respect the principles of international humanitarian law in their operations, specifically distinction and proportionality. The possibility of civilian casualties when targeting fighters or military facilities should not be overlooked, and special attention must be paid to avoiding targeting civilians and civilian facilities in military operations.

The violent bombing campaign also included the villages and towns of Kafr Awaid, Qaqafin, Al Mozara, Al Kinda and Al Haluba, and the vicinity of Majdlia, the southern countryside of Idlib. In addition, the artillery shelling focused on the villages of Sufuhun, Al-Bara, and San.

Since the beginning of this year, civil defense teams have responded to more than 420 attacks launched by the Russian and Syrian forces, which caused the deaths of at least 53 civilians, including 10 children and nine women, and injured about 136 civilians.

This week, the towns, and villages of Jabal al-Zawiya witnessed a significant increase in aerial and artillery bombardments, which killed 12 people and injured more than 20 others.

The seam areas in the countryside of Idlib, Hama and Latakia witness daily violations by the Syrian forces, which repeatedly target civilian homes, agricultural lands, vital installations, and military sites of the armed factions.

Euro-Med Monitor’s Chief Operations Officer, Anas Aljerjawi, warned against the Russian and Syrian forces’ escalation of attacks against civilian areas in Idlib. “The escalation must be contained before reaching dangerous heights,” Aljerjawi said.

“The recent attacks greatly threaten the ceasefire agreement in Idlib that Turkey and Russia reached more than a year ago. It is a matter of grave concern what these attacks might do to the already deteriorating humanitarian situation of hundreds of thousands of civilians living in the area”.

The Russian and Syrian forces must immediately stop their attacks on residential areas in Idlib and its countryside, respect the ceasefire and abandon their policy of targeting civilians and civilian facilities.

The international community must also act urgently to end the indiscriminate attacks against civilians and areas with no military advantages, open an urgent investigation into the horrific killings committed by Russian and Syrian forces, and hold all those involved in these unjustified attacks to account.